Guidelines and Infos for participants of tommorrows Bike-Action at Inner Ring, 3pm!

Alliance ‘Solidarity for All’:

#SolidarityInsteadOfNewNormality on May 1st and always! 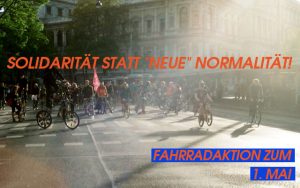 The current crisis has deepened many of the injustices and contradictions inherent in the capitalist system. Safe housing remains a privilege. While hotels are empty, homeless people are forced to choose between staying outside or risking infection in full facilities. Similarly, refugees in Greece’s overcrowded camps are left in the cold knowingly that if Corona breaks out there, countless people will die. But even for those with a home, being locked up means living in danger. Many women* experience their own homes as places of domestic violence.

Profits continue to take priority over the welfare of workers. The crisis reveals which labor is truly essential to meet societies basic needs and who it is meeting them: Nurses, shopkeepers, bicycle couriers and other precarious labourers who keep society running under the most adverse working conditions – often without adequate protective equipment, simply because the market does not supply it. Instead of shorter working hours with higher wages they receive a cynical applause. 70% of this work is done by women, who simultaneously are responsible for a large part of care work at home. Due to a lack of migrant workers, which is caused by national state isolation, crop failures and care provision shortages threaten.

While the state economy tightens rescue packages for the upper class and communalizes losses, cultural workers*, artists* and many others are fighting for their existence. In this light, it is disgusting to see the Austrian government demanding gratitude of those with one hundred percent loss of wages for giving them a few hundred euros.

We see the 1st of May as a historical day of struggle of the working class and a day of action to denounce the government’s current violations of fundamental rights: If economic life is now being revived, why is public political expression still enormously restricted? If goods can be sent across borders, why are people being detained on the Mediterranean Sea and imprisoned in camps on the external border? We cannot allow our health and fundamental rights to be subordinated to economic interests. However, all this is supposed to be the new normality to which we must adjust.

But this New Normality is to be opposed by solidarity for all – together against the unacceptable capitalist normality, which has existed before and will continue after Corona!

Because we are “in solidarity”, we – as working people, as unemployed, as students, as activists – cannot take to the streets on this year’s 1st May. We want to observe the protective rules. But we also see that “solidarity for all” means something different than a crude ideological unification of different political parties, and that is why we will not be still but express our resistance with colorful and diverse actions, as we would normally do on this day.

Let’s get out on May the 1st! Let’s conquer the ring during this unannounced action by bike or on foot, with mouthguards and plenty of safety distance at 3 pm. Let’s fight together for a future in solidarity for all and oppose the nightmare of their ‘new normality’! Carry your messages with signs on your back, bring music and everything else you need to make clear that in these times we don’t let ourselves be forbidden to speak, no matter the prohibition of demonstrations. 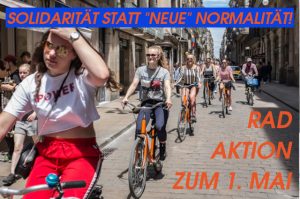 For any request please use the following e-mail contact: